Have you ever faced a WOW51900319 error in World of Warcraft and felt disappointed? This issue stops players from completing their game, and they also could lose all their precious data.

If you’re here for a solution to fix the WOW51900319 error, go ahead and read the full article. This post will help you to resolve the issue, and you will not face this one again.

Blizzard Support says that there are many possible reasons players are facing this error. Some of them are listed below:

It is one of the most effective fixes for almost all kinds of gaming errors. Setting the background fps to 30 will help you to solve the WOW51900319 error in World of Warcraft.

Step 1: First of all, press Esc or click the Menu icon in the game window.

Step 2: After doing this, go to the System option. 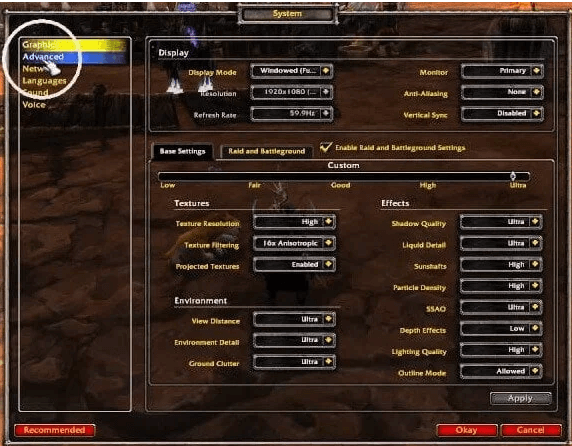 The foreground FPS of the game can be another reason for the wow51900319 error in the World of Warcraft game. The unstable internet connection cannot support the high game graphics settings and thus disconnects.  To fix this issue, you can reduce the foreground FPS. Follow the steps below to learn how to lower your foreground fps.

Step 1: Open the World of Warcraft game on your system.

Step 2: Press the ESC key to open the game menu. 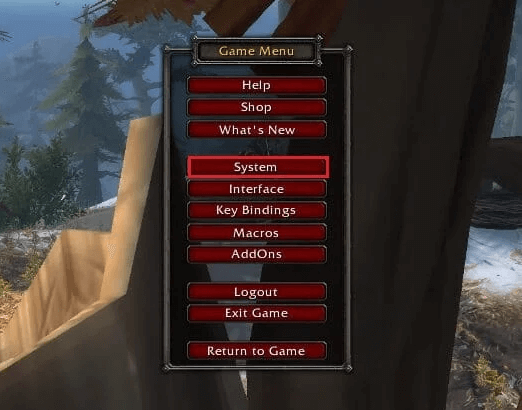 Step 4: Go to the Advanced option.

Open the World of Warcraft game again to see if the WOW51900319 is resolved.

Your slow internet connection might also be the cause of this unpleasant error. This solution will fix your network issue. Also, check whether you are playing the game on a 4G LTE connection because there is a high chance that you’ll face the problem.

Here’s how to do it:

Step 3: Go to the Network tab and click to uncheck Optimize Network for Speed. Then click Okay to save the changes.

This solution might solve your issue, and you’ll be able to enjoy the WoW game again in your system.

Another effective solution that might help users get rid of WOW51900319 error in World of Warcraft game is high-speed Ethernet connections. An ethernet connection is ideal for gaming purposes compared to LTE or Wi-Fi networks with the same network bandwidth and speed.

It is seen that Ethernet cables have very less network latency and a high speed. So there will be fewer disconnections. Wired connections are far better in speed as compared to wireless ones.

This solution seems very easy. Yes, it can be a game-changer. You don’t need to follow long steps to resolve the issue but have to log out and re-login into your Battle.net account in World of Warcraft.

This simplest method helps you when there are some technical faults in the World of Warcraft servers due to which your account might not receive enough packets, which causes high ping. The user also gets disconnected from the server in such cases.

To run WoW smoothly, all you need to do is log out of Battle.net and log in again.

Method 6: Use VPN from other regions

Server overloading can be a reason behind the WOW51900319 error.

Sometimes, the specific region’s WoW server gets overload from a massive amount of pings, due to which the server stops responding to any further requests.

The VPN of some other region helps you get rid of the issue. Now it is not the previous overloaded server. This feature allows users to change their location virtually and connect to a different server that can respond to their request, and they can continue playing.

Some display and interface issues can also be a reason behind WOW51900319 error. So it’s recommended that you reset the user interface to see if it can fix the problem.

Step 1: Close and Exit your World of Warcraft game. Also, make sure that it is not running in the background.

Step 3: Open Battle.net, click Options and select ‘Show in Explorer’ for Windows whereas ‘Reveal in Finder’ for Mac.

Step 4: In the pop-up windows, open the folder named World of Warcraft.

Step 6: Reopen Blizzard.net and World of Warcraft to see if the game running properly.

If the error still exists, then you need to delete the system backup files as well.

Step 1: First of all open control Panel and enable the option that says Show Hidden files and folders.

Step 2: After that, Windows Key + R to open Run window.

Step 3: Now type in the following command and press Enter.

Step 4: Open the Program Files folder and, after that go to the folder named World of Warcraft inside it.

Step 5: Delete the Cache, Interface, and WTF folders inside the World of Warcraft folder.

Step 6: Now restart your computer and check if the error still exists.

Method 8: Uninstall and Reinstall the World Of Warcraft Game

This is the last method that you can give a try if any of the methods mentioned above do not work for you.

Here are the steps:

Step 2: In the next step, uninstall the WoW game in your system and delete all the residual or cache files.

Step 3: After that visit the official website of the World of Warcraft game. Download and then reinstall it in your system. Once the application gets installed, launch it.

Step 4: Now log in to your battle.net account again and retrieve all the game data that you want.

Note: This method is a little risky as you can lose your game data. Follow this method only after trying all the other methods listed above.

So above are the best solutions that you can use to fix the error WOW51900319 in the World Of Warcraft game.

If you face any difficulty while trying any of these methods, let us know in the comments section below.

How to Fix CS:GO’s “VAC was Unable to Verify Your Game Session” Error

How to Watch ESPN on Kodi Live