Clash of Clans (CoC) is one of the most addictive combat strategy games available on almost all the mobile platforms out there. Games like Clash of Clans also have similar gameplay but different in terms of style.

In CoC, there are lots of missions, from single-player campaigns to multiplayer adventures. Player’s aim is to spend most of their time gathering resources to create better buildings and produce stronger soldiers.

In this game, players need to wait for getting things done. They have to build a kingdom and protect it from the opponents.

So here are some of the best alternatives that you might enjoy.

Clash Royale is of the biggest alternative to CoC. It mixes strategy with card games in a simple formula, consisting of summoning creatures from Clash of Clans with the goal of destroying the enemy king’s tower at the same time as you protect your own.

This game focuses on 1v1 or 2v2 real-time battles with other players. The game is all about building your battle deck, forming clans, challenging other players in a duel, or even work together to unlock big clan chests. 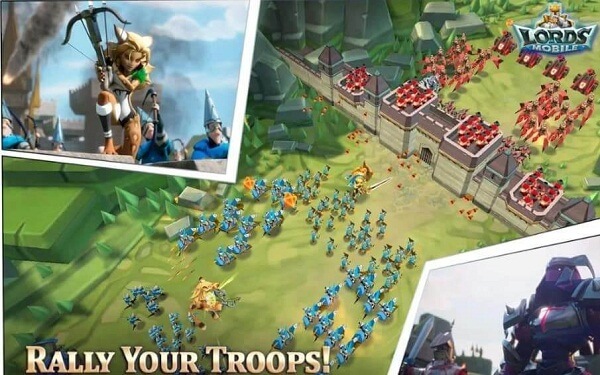 Lords Mobile is another addictive game similar to CoC. World-building mechanics, open-space RPG, and RTG-you’ll get all these game types into a single title.

In this game, you have to build your own base and create a strong army and then attack and destroy enemy bases. To get success, don’t show mercy and destroy everything in your path. Also, don’t forget to seize resources and use them to advance your empire.

Lords Mobile deals with building kingdoms. Players are allowed to recruit war heroes or even kings who are imbued with special skills for battles.

Boom Beach is a military-themed game with many more unique elements that give it an entirely new identity.

In this game, your primary goal is to protect your island against attacks. The title focuses on the military strategy part, challenging gamers to build their own base from scratch and upgrade their buildings and troops.

There are both single-player missions as well as multiplayer campaigns. The game provides a richer and fuller experience and lets you train troops and create powerful weapons in the advanced world.

Siegefall is another one of the best multiplayer games like Clash of Clans. The game features mighty heroes, brave spirits, powerful troops, and magic battle cards.

In this real-time strategy game, you have to build an army of mighty heroes and then take on players from around the world in live duels.

Players can also create their clans and work towards a common cause. You can also team up with buddies to go on raids to destroy the enemy clans because there is only one king who can survive!

To feel the immersive graphical experience, you should give Dawn of Titans a shot.

The game offers real-time battle controls, a plethora of events and campaigns, and unrivaled kingdom-building features.

You are the king who controls the army to fight against the enemy. Players can team up with friends and create alliances to take down other player-controlled kingdoms.

The large-scale battles with thousands of troops are some qualities that are hard to find in other video games.

Gods of Olympus is a strategy-based game where gamers build up their bases and assault different bases and groups.

The game equips players with the ability to summon and control ancient Greek gods and goddesses instead of an army. Players have the option to unlock deities like Ares, Apollo, and Artemis. Each god and goddess has unique abilities that can be utilized during the offensive missions.

All buildings and upgrades are completed instantly mean you won’t have to wait for a build timer. Instantly buy and sell buildings, reinventing your city at any time. Explore a huge variety of city layouts and defensive strategies.

Clash of Empires is a strategy game set in medieval times. The characters in the game are actually historical figures, such as Genghis Khan, Elizabeth Bathory, Julius Caesar, Alexander the Great, and Cleopatra, among many others.

Clash of Empires allows players to control the troops in the game and lead them to an epic fight against their enemy.

Every character has its own stats and abilities and can come in handy for different purposes. As a lord of your kingdom, you can train your army, make allies, capture neighboring territories, and kill enemies all over the world.

You will have to build an empire from scratch and develop a civilization.

Brave Conquest is one of the latest games like Clash of Clans. It is a good mix of new features and game mechanics and offers a fresh yet familiar package that can be played and enjoyed by newbies.

You take back your land from your enemies one area at a time and free bits of your army as well. Slowly, it becomes part of your basic responsibilities to liberate more buildings, heroes, and troops. You keep upgrading each one to better prepare yourself for the challenges ahead.

Also, you can grow your army, add new features like spellwork, and build castles.

All these Clash of Clans type games are amazing and make you forget CoC. Choose one that you liked the most and start playing it for unlimited fun and enjoyment.